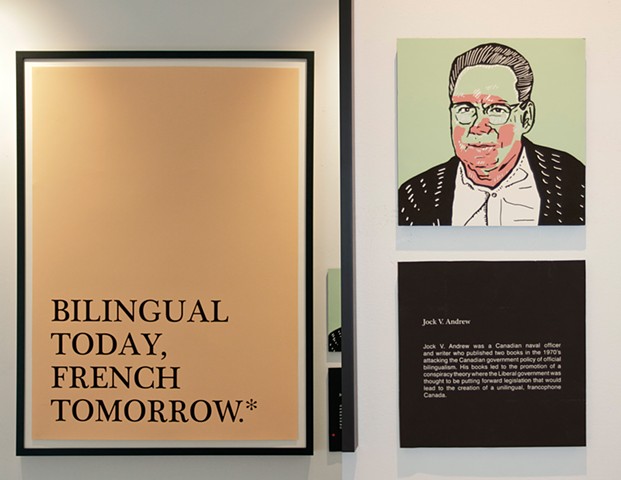 An absurdly shocking exhibit on the implications of fatalist prophesies in the construction of the past, and present. Featuring irrelevant quotes from inconsequential writers, and supported by misleading and incomplete factual information, this visual ‘popaganda’ is sure to please the eye and tease the misinformed.

Zoé Fortier is a visual artist and Graphic designer from the Fransaskois town of Zénon Park. She works mostly for La Troupe du jour, Saskatchewan’s only French theatre company. Her most recent work is greatly inspired by the illustrative aesthetic of the iconic American Marketing company PUSH PIN STUDIOS.

Jock V. Andrew published a book titled Bilingual Today, French Tomorrow: Trudeau’s Master Plan and How it Can be Stopped in 1977. This book inspired Zoé Fortier to explore the role of the historical narrative in the construction of a people’s perceived future. Guided by Dustin J. McNichol, PhD Student/Doctorant at the Department of History at the University of Saskatchewan, her research revealed sometimes parallel, sometimes contradicting narratives of a same subject. She was surprised to discover that the area where certain English-speaking writers (Languages in Conflict: The Canadian Experience, 1967, Richard Joy), and certain Québécois separatists (Pourquoi je suis séparatiste,1961, Marcel Chaput) agreed upon was the inevitable disappearance of the French minorities of western Canada based on demolinguistic data.

In a present that has already been constructed by the Western perspective of history, and in a time in history where academic findings are increasingly dependent on private funding, the artist wonders... who is saying what, to whom and for whom?